feel less stressed about my business 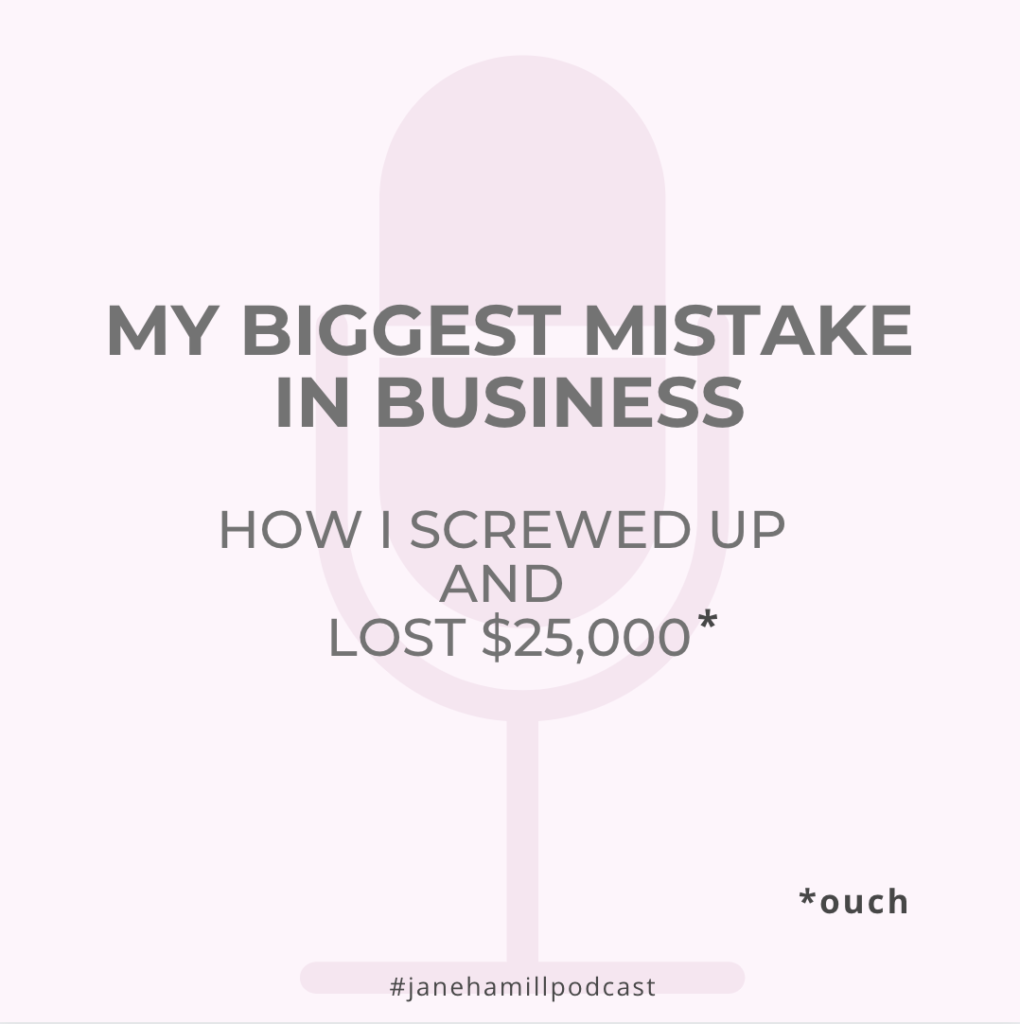 I should really call this episode…

No, it’s not a joke. My biggest mistake in business was when I screwed up an order with a major department store and it cost me waaaaaay too much money. And confidence. And shame.

It’s never fun when you screw up, and I’ve made a gazillion business mistakes during my gazillion years as  a business owner, but the mistake I’m sharing today is particularly epic.

This one hurts because it was avoidable. The mistake happened because I didn’t trust my gut, my instinct.

Listen here – or you can scroll down to read the full story below.

After you listen (or read below) to this episode, tell me this…

Thanks for listening (and reading),

If you prefer to READ the story of my biggest mistake, here it is in written form. 🙂

This article is adapted from the one originally printed in the Chicago Tribune.

I could title this story…

No, it’s not a joke. My biggest mistake in business was when I screwed up an order with a major department store and it cost me way too much money.

One thing I talk about repeatedly is the importance of being a business person first, and a creative person second. That’s assuming you want a business that makes money. As a brand new fashion designer, I made tons of mistakes. One of the epic ones was when I didn’t trust my gut, and it ended up costing me $25,000 in sales. Here’s what happened…

I get my first big order

I was 25 and barely out of fashion design school when I started my own clothing line and began selling my designs out of my own women’s clothing boutique in Chicago. Just two months after I opened, a buyer from a major department store (Marshall Field’s/Dayton Hudson, now acquired by Macy’s) walked in, and soon I shipped my first order to four of their stores. I was thrilled!

Things went well and I remember the buyer saying my pieces had a better sell-thru than one of Oscar de la Renta’s lines. Sweeeeeeet.

I ran into trouble with the second delivery. I had ordered the fabric with plenty of lead time, but when it was two weeks late I finally heard from the fabric supplier. The black fabric I ordered was out of stock, and could they replace it with a “charming forest green”?? I had promised the store outfits in two colors — red and black — and I was afraid I’d lose the whole order if I only delivered the red colorway. Since there was no time to order this exact fabric in black, I sent a swatch of the green to the department store buyer and to my surprise, she approved it.

I get a sinking feeling in my gut

I was surprised. Because I had a sinking feeling in my gut.  There’s a reason why black is so popular. It’s slimming, hides dirt and goes with everything.  Women know this, I know this. I should have listened to my gut then, but I really knew things were wrong when I was packing the boxes of red and green — it looked so Christmasy — but after all, the buyer had approved the switch, so it had to be OK, right?

Well, my gut was right. The green did not sell. It was a disaster. The department store buyer told me I had two options —  I could take the green outfits back or I could give “markdown money.”

What is markdown money?

I was a new fashion designer and had never heard of markdown money, which is when the designer gives a credit to the store when the designer’s merchandise has to be marked down. I was horrified, but I agreed to it because I was afraid of losing future business.  I agreed to give a credit on a future order to the tune of $25,000. My business would take a major hit, and I was scared.

Learning to trust my instincts as a business owner

I was mad at the buyer — why should I give the markdown money when she approved the green fabric swatch?  She should have taken it out of her own check. Angry sigh…

But then I realized I was equally to blame, and I was just as frustrated with myself.  I KNEW that green color was wrong. I literally got a sick feeling in my stomach when I saw it. It just wasn’t right. But I was too excited and I wanted the order so badly.

This mistake didn’t put me out of business. I learned from it and now I don’t ignore that feeling in the pit of my stomach. Ever.

My mistake was costly and embarrassing, but I was – and still am – determined to learn from it. My wholesale line and my brick and mortar store both survived.

So tell me this… Have you experienced something like this?

This week, two different entrepreneurs asked me the same question. “What if my next season’s collection doesn’t sell?” And the funny thing is that one of them has been in business for years and is quite successful, and the other one is just starting out.

Yet they’re both worried their product won’t sell next season. It’s amazing how we’re all different yet we all struggle with the same stuff.

There’s always fear in business – heck, in life too. This episode will help you deal with the unique “what if it doesn’t sell” version of that fear.

You can also listen to this episode on iTunes and Stitcher Radio.

What we cover in this episode

Your turn! Can you relate? What’s your ONE takeaway? I LOVE hearing from you so please leave me a comment!

Thanks for reading and listening,

P.S. I’m serious, people…If you like this podcast then stop lurking and LEAVE ME A COMMENT! It feeds my soul and makes me want to give you more free stuff. 🙂

In today’s episode, I give you 2 very simple and quick ways to feel less stress in your daily entrepreneurial life. The roller coaster of being an entrepreneur can make anyone a little anxious.

What I’m teaching you today has helped me and my clients SO MUCH. We talk about cash flow and “what if” scenarios in your business.

Tell me this…if you KNEW you could feel less stressed about about your business in the next 2 hours, would you want to? The 2 steps I teach in this podcast will help you sleep better at night, worry less, and believe that everything really will work out OK.

It’s amazing how simple it is and how much peace of mind you can get from these 2 things. Perhaps it’s because you take some of the power back when you feel like you’re in control of your business rather than it being the beast you battle.

It’s stressful being an entrepreneur these days – so many moving parts – so do yourself a favor and do exactly what it says to do in this episode. I truly believe it will help you.

You can also listen on iTunes or Stitcher Radio.

Want to feel better about your creative business in the next 2 hours? Here’s my challenge to you:

3) Do the 2nd part, “worst case scenario”: spend 56 minutes on this. Do it in a quick, bullet point, brain dump style. Don’t overthink it, just get something on paper. Right now, you’re just getting this into ACTION and you don’t have to spend an entire evening on it like I suggest in the episode – and you certainly don’t need wine :).

4) Next, leave me a comment below and tell me what happened: 2 minutes. Was it useful for you? Do you feel better? I can’t wait to hear from you!

Thanks for listening,
Jane

P.S. If you enjoy listening to my podcast and would like access to more training and support like this, head on over and check out my new monthly coaching program, Imperfect Action. The goal is to get you into ACTION to get your business more profitable without feeling overwhelmed. Request an invite here.